The Crisis in Venezuela through the Eyes of the Impacted 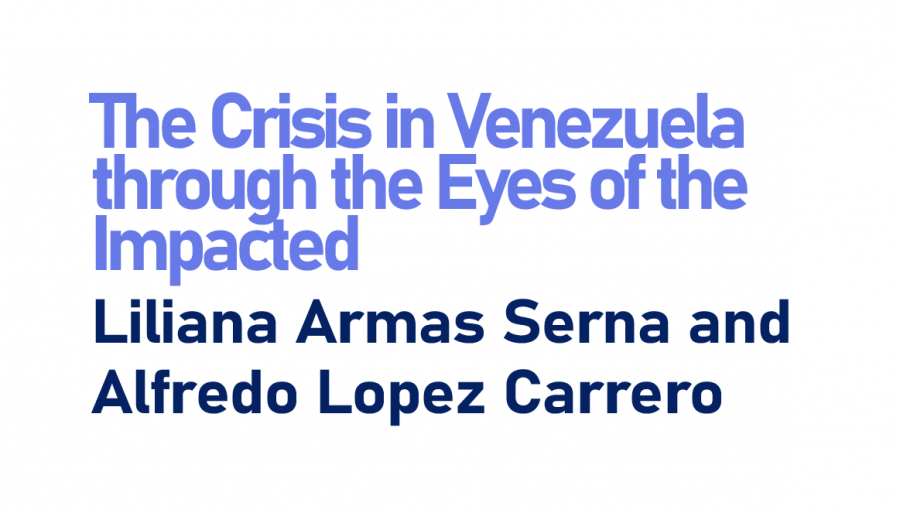 The crisis in Venezuela is one that has been overlooked and ignored by the rest of the world. Abandoned by the place we once called home, many Venezolanos, including myself, forcefully left Venezuela and migrated to other countries in pursuit of a better quality of life, not only for themselves but for their families. Four million people and counting have fled Venezuela, being forced to start our lives over in other countries in an attempt to escape the collapsing economy, the outbreak of violence on the streets, and the extreme food and medical shortages. For these reasons, it has been called the largest refugee and migrant crisis in modern history—it was not always like this. As a refugee student from Venezuela, here is my story:

The best way to describe my early childhood is with one word, “prosperous”. I was born in the city of San Cristobal, Tachira, Venezuela to a middle-class family with both working parents. My mother was an environmental engineer and was the head of the Environmental Protection Agency’s government branch. My father specialized in farm engineering and worked with animals for a living. As any parent would, my parents provided my two older brothers and me with whatever we needed and for a short time, I remember actually living the life of a child: carefree and happy.

As I grew a little older, around the age of seven or eight, that was when I started to notice a drastic change in the prices of things, as well as, the change in the social climate. At an early age, I began to see the overwhelming effects of inflation on my neighborhood. For instance, I remember the empanada I used to buy for lunch almost every day had doubled in price in what seemed to be overnight, along with a lot of other things. The real value of money plummeted as time went on, and prices steadily rose. To give you an idea, my mother bought her first car for 60,000 bolivares, but when I was growing up 60,000 bolivares could barely buy you a sandwich. Because people’s money was decreasing in value, panic spread throughout my city quickly. My parents stopped letting me play outside or hang out with friends because the streets became too dangerous. There was constant news on the street of people getting robbed of their possessions and more often than not, getting killed for them too. A lot of people resorted to robbing and murdering others, as well as, stealing items that were deemed more “valuable” over money, causing people to resort to a barter and trade type system. When I would first hear from neighbors or friends about someone being murdered in the neighborhood, I was shocked, and in complete disbelief. However, over time you get used to living in this kind of climate. As I got a little older, I would hide my phone inside my left shoe to avoid being targeted— it almost became the new norm. The violence got so severe that every day someone else died and they were quickly forgotten the next day because there was always someone new who died. The city turned into a place where items had more value than people’s lives. There were no bad neighborhoods to avoid nor dangerous alleyways to not walk into because people were being targeted anywhere and everywhere. I no longer knew what it was like to walk without fear. A sense of safety and security no longer existed for me nor my family.

I studied at a private school in the central part of the city, called the Colegio Parroquial Coromoto. Growing up, I was always an exemplary student in my school even as I was witnessing how my country collapsed in every way possible. The Maduro government had made changes in the Venezuelan education system so that the books produced by the government were used excessively, whereas any topic of science or literature was heavily mixed with politics. Each practice problem promoted populist ideologies and even promoted “attractive”  ideologies and supposed achievements of the Maduro regime. This was a perfect example of indoctrination on the government’s behalf. I began to feel that the situation in Venezuela was worse than I imagined, and in the end, I lost hope that one day we would get out of this crisis. I concluded that while the country was drowning in poverty, the government was trying to indoctrinate the youth to have them on their side and strengthen themselves by manipulating the new generations. However, no one ever said anything and the media never talked about it. That is why in the last two years of high school I began to participate in protests to stand in solidarity with those going against the regime and fighting for what is right. But every time a protest came about, the Venezuelan military actively worked to silence us as much as possible. During one of the protests that took place in February 2015, I witnessed the murder of Kluivert Roa, a classmate of mine.

The day when we decided that it was time to leave my country was when my mother and her co-worker were blindfolded and kidnapped by the Servicio Bolivariano de Inteligencia Nacional, also known as SEBIN— an intelligence agency in Venezuela. As an environmental engineer and the head of the Environmental Protection Agency, she would often challenge and push back against the regime. They held my mother and her co-worker hostage for a short period of time and questioned them about any plans to push back against the regime. My mother was fortunate to have escaped this situation alive because many were not so lucky. It was after that incident that my parents decided that it was time to flee immediately. I had just graduated high school, so as a “reward”, my parents tried to convince me that we were going to go see a soccer game in the United States, but I had a feeling that we would not be returning. That following week, my father and I left Venezuela while my mother and my brothers were meeting us later to not raise any suspicion. At the time something I did not realize about fleeing your home, is you are not allowed to look like your fleeing. You are supposed to look like you are going on vacation, and when you go on vacation you can not take your baby pictures with you. You can not take any family albums with you. No childhood toys, no beloved pets, no books— nothing. I could not take anything memorable to me. I left everything behind and I felt like I was starting a new life against my will.

When my father and I came to the United States, we went to a soccer game, in which someone from the crowd recognized my father and he gave us his number. He lived in Chicago and offered to find us a place to stay, but since we had the plan of moving in with another family member in Indiana, we made a conscious decision to go to Indiana. However, a couple of months later, that same family member told us that it was no longer okay for us to stay with them and so we made the journey to Chicago. Not knowing where to go or what to do, we stayed in Union Station for two days, sleeping there overnight. Not knowing what was going to come next, was overwhelming. More than anything, I wanted to go home, but I knew that was no longer a possibility because my home no longer existed. On the third day, we contacted my dad’s friend in Chicago and he found us an attic to live in. Since we did not have anything with us and the attic was not equipped with anything, we had no choice but to get a mattress from the street and sleep on that. That was when I first discovered what bed bugs were. In Venezuela, we lived in a hot climate, so they did not exist over there. For a little over three months, I slept on a mattress riddled with bed bugs while my father scrambled to find a job, any job that he could. Eventually, he ended up finding a job working third shift at a factory. I had to spend countless nights by myself in the middle of winter in Chicago, with no heater, thinking to myself, “when will things get better?” I cried a lot during those nights. I think I did nothing but cry, it was all I could do— I felt helpless.

Eventually, my mother and my brothers came to Chicago, and together, we found and moved into the apartment that we live in today. My parents went from having engineering degrees, working in important and professional occupations, to having nothing, practically overnight. The Maduro regime stripped them of their hard-earned work, along with many others. I hope in the new life that we started here in Chicago, I can reward them for their sacrifice and show them that moving to the United States was worth it. My goal here is not even to be rich nor to buy them a fancy house or fancy cars. My goal is to work hard enough for them to be proud of me and content with their choice to come here, as well as, to feel happy and valued again.