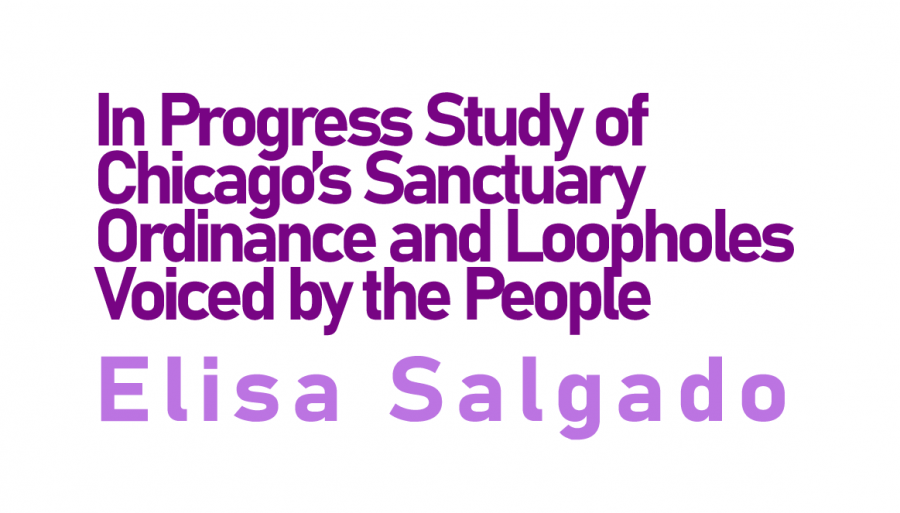 My current research focuses on Chicago’s Sanctuary Policy. Although much has been written when it comes to U.S. Sanctuary Cities, the literature is lacking when it comes to Chicago. To shed further light into this area, my this study poses the following two research questions.: What has been the role of grassroots organizations in Chicago’s emergence and evolution as a Sanctuary City? How effective have Chicago’s Sanctuary City ordinances been in providing a safe haven for undocumented immigrants living in the city?

According to the Pew Hispanic Research Center (2016), there are approximately 450,000 undocumented immigrants residing in the State of Illinois. Of this total, 307 thousand are living in Cook County and 183,000 are living in Chicago (Chicago Tribune, 2017). Due to the high concentration of undocumented immigrants residing in Chicago, the effectiveness of Chicago’s Sanctuary City ordinances has become increasingly important.

Although Chicago has a long history as a Sanctuary City, ongoing grassroots efforts for a stronger Sanctuary City ordinance underscore the weaknesses with the city’s policy to protect undocumented immigrants living in Chicago; however, city officials have remained silent when federal deportation targets the hard-working undocumented individuals residing in Chicago. The gang database gathers migratory data on suspected gang members and then shares this information with federal agencies to provide further validity to the concerns raised by grassroots organizations.

In 2018, President Donald J. Trump – a staunch opponent of Sanctuary Cities – threatened to withhold federal funding from any locality that failed to support federal immigration policy. Despite fiscal federalism threats, Chicago Mayor Rahm Emanuel and Chicago’s City Council have stood firm and continued to support Chicago’s position as a Sanctuary City. Nonetheless, despite voicing support for Chicago’s undocumented community, city officials are being called out for what appears to be a hypocritical stance on the issue.

Chicago’s gang database is a pipeline which allows the collaboration of the Chicago Police Department (CPD) and Immigrations Customs Enforcement (ICE). The CLEAR database, often relies on racial profiling to identify and classify suspected gang members. Individuals placed in these databases are often unaware of this action and, if they are aware, they do not have a medium to challenge this classification. Not only do these databases include migratory information on suspected gang members, but they are often shared with federal officials when prompted (Hufstader, 2015).

Another loophole in the amended Sanctuary City ordinance deals with its silence when it comes to random immigration raids. Chicago may be a Sanctuary City, but ongoing immigration raids continuously put into question the protections afforded to Chicago’s undocumented population. Although, the research is still in progress, grassroots organizations pressured elected officials to establish Chicago as a sanctuary jurisdiction. I also found that Rahm’s Welcoming City Ordinance has failed to protect undocumented Chicagoans. This is an issue for undocumented Latinx individuals because they have a high possibility of being placed in such database which will make them vulnerable to deportation simply because of the color of their skin.

We need to continue to push elected officials and mayor Emanuel to close these loopholes by abolishing the gang-database like in the state of Oregon. We also need to lobby Springfield to pass the Safe Zone act which, expand public safe zones that outlaw the presence of ICE and as a result, terminate raids. In the end, even though Chicago may be recognized as a Sanctuary City, there are those who question whether undocumented immigrants are truly being protected.