Intersectional Feminism in one woman’s words 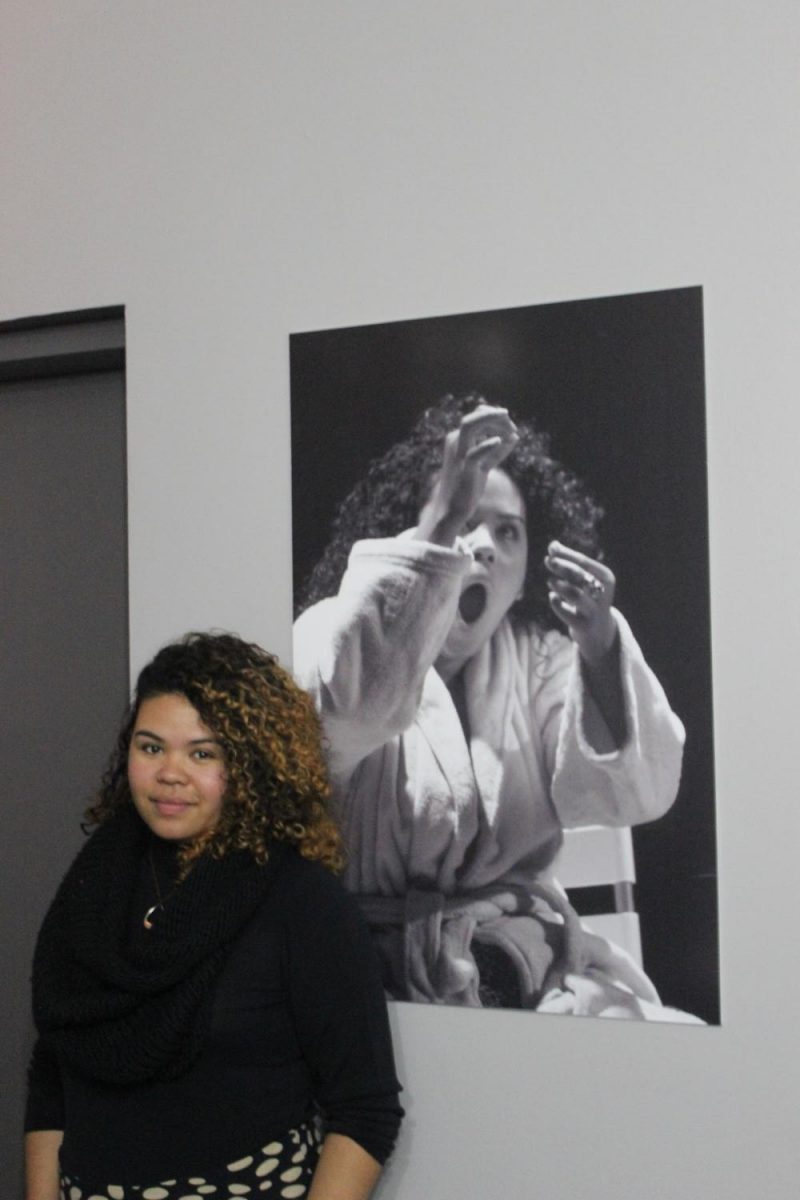 Melissa Stands in front of the poster for her one woman show Sushi-frito.

“My feminism will be intersectional or it will be bullshit,” Melissa DuPrey exclaimed, quoting the title of Latina writer Flavia Dzodan’s article published online in the Tiger Beatdown.

Feminism is not about caring “only for equal pay,” but it’s also about fighting for the Black Lives Matter movement, for immigration reforms and for LGBTQA rights. Feminism is equality for all–it’s inclusive and full of color. Intersectional feminism is about advocating for the marginalized; it’s about demanding equal rights to be human, regardless of sexual orientation, sex, religion and especially skin color.

When DuPrey went to the Women’s March in Chicago on Jan. 21, she absorbed the scenery around her. She was surrounded by women laughing and chanting as they held up the posters they’ve made. Many of these posters had one focal point: the importance of the equality for women. They all showcased the yearning these women have for equality, for reproductive rights and DuPrey could not have been more blown away from the intensity of it.

Women’s March on Chicago’s website estimated 250,000 women and allies gathered at Grant Park to show their support for “women’s rights, civil liberties, and diverse issues.” While that might have been the goal, DuPrey was profoundly aware that she was one of the few black faces amid a white crowd.

“I was deeply saddened by the fact that most of the people out there were white women,” Duprey confessed. “They claim to be feminists, but they are not out for intersectional causes. As a woman of color– a Latina, black woman, I find that my activism has to be intersectional. Nothing about me is a singular term!”

Both of DuPrey’s parents are from Arecibo, Puerto Rico. While her father is dark, the rest of her family has lighter skin. Growing up, she was aware that she was the black one, la negrita of the family, which left DuPrey questioning her identity as a Puertorriqueña. She was teased about her skin color and her hair; her hair being curly and big, she felt like no one knew how to handle her hair since it had a different texture than others.

“There’s a certain amount of shame that came with [being black] as a young person,” DuPrey said. She felt like she had to know who she was first in order to truly accept her appearance–to accept herself.

When she went to Texas for her undergraduate work at the University of Houston, many people there judged her to be black, while others labeled her as simply “Latina.” The Puerto Rican community was not very present in Texas, which forced DuPrey to proudly declare herself Puerto Rican. She would wear shirts, earrings, shoes and book bags with the Puerto Rican flag on them, proudly showcasing her heritage.

“I was literally a walking flag,” DuPrey said while laughing, and, at the time, that was enough to make her feel like she knew who she really was.

Toward the end of her undergrad work, DuPrey and her mother suffered a home invasion that left them both traumatized.

“I said ‘I’m done,’” DuPrey recalled, after graduating with two B.A. degrees in Spanish and Theatre. “‘I need to go back home to my community and family, and I need time to heal.’”

She spent two months in her grandmother’s house trying to rebuild her life when she was reintroduced to Bomba.

After an emotionally hard day, DuPrey went to have a few drinks when she heard Bomba playing upstairs. As she investigated the music, she discovered an all-female class learning how to dance and play Bomba.

“It was such a spiritual awakening,” DuPrey said. “It was the path to me rebuilding and finding myself because I had been so lost.”

Bomba had been around DuPrey all of her life. It was often danced in festivals and parades, viewed as something that can be compared to Mardi Gras–only for special occasions, something people just do. Bomba was actually everywhere; it was almost taken for granted.

DuPrey dove head-first into playing Bomba; she was a part of the band and played the music. Coincidentally, she found out that her aunts and elder relatives were successful musicians – Awilda Sterling-DuPrey was a part of “LosPleneros de la 21,” whom played during an episode of Sesame Street back in the early ‘80s.

“I didn’t know that [Bomba] was a part of my legacy,” DuPrey said, sounding pleasantly surprised. She loved to play Bomba because, to her, it was a way to resist white supremacy and privilege. “It was a way to push back against the things that made me feel like I’m not worthy, or that I don’t belong. . . or that I’m not beautiful.”

Upon her arrival back to Chicago and rediscovering Bomba, DuPrey felt like she had to take a step further into exploring her identity. Unlike Texas, Chicago has a thriving Puerto Rican community; being Puerto Rican simply wasn’t enough anymore. DuPrey loved her skin color, but she didn’t know how she fit in with the black communities and with Latino/as that were lighter than her.

Bomba helped her realize that her people have African roots and she had an African heritage to praise. While Bomba is often seen as a part of Puerto Rican culture, DuPrey argues that it’s more than that.

Bomba is a popular folk dance in Puerto Rico that has native Taino, African and Spanish influences; like DuPrey, Bomba is intersectional with all three cultures that thrive in Puerto Rico. It’s considered to be a challenge between dancer and drummer, where the drummer follows the dancer and provides a synchronized beat.

Bomba can be traced to the early European Colonial Period in Puerto Rico. The enslaved Africans created Bomba as a way to pray and escape hardships, while still communicating with each other since many African families were split up. The folk dance was often prohibited by the slave owners since they were sure the dance was a way to organize rebellions.

“My connection to Bomba was very visceral,” DuPrey said. After she researched the history of Bomba, she could identify more with her African heritage.

“I can’t hide this, nor would I want to,” DuPrey said.

Instead of shying away from her blackness, DuPrey embraces it. For years, she felt like she didn’t fit into one little Puerto Rican or Black box.

She struggled to know her true identity.

As she pursued her acting career and gained recognition in that community, she would always go back to her roots and remember that she’s more than one label.

“My choice to identify as Afro-Boricua is a very strong stance to say I am resisting the erasure of my African heritage,” DuPrey said. “I’m making sure I lift that.”

heatre, founded in 1969, is the definition of diverse community theatre. Part of their mission is to create original performance with and for Chicago’s communities, especially those that are normally invisible. They provide performances, training, and affordable theatre for and within the communities they serve.

One of Free Street’s most notable projects is the two-year ensemble youth program. Teens 13 to 19 years-old create, design and perform their own shows with the help of professionals like Duprey and her team. A lot of those youth move on to the multigenerational program, in which young adults age 19 and older keep creating performances and other grassroots projects of their own.

Free Street Theatre is based in Pulaski Park (1419 West Blackhawk). Beginning May 18 Artist-In-Residence Lani Montreal is hosting a four day multimedia festival on motherhood’s joys and challenges. Showtimes, dates and ticket pricing can be found at FreeStreet.org. 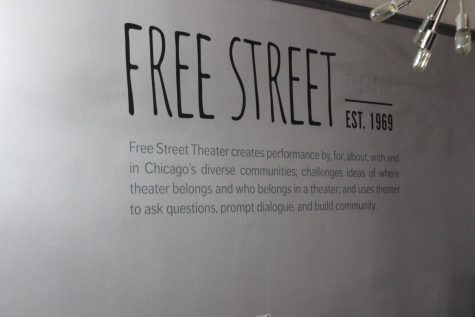 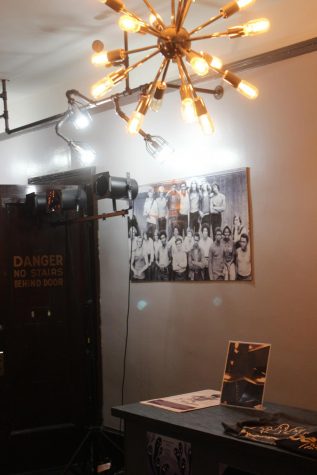 Robin Bridges A photo of the first Free Street theater ensamble hangs at the entrance of the theater.

Robin Bridges Participants at Free Street sign their names on the wall.