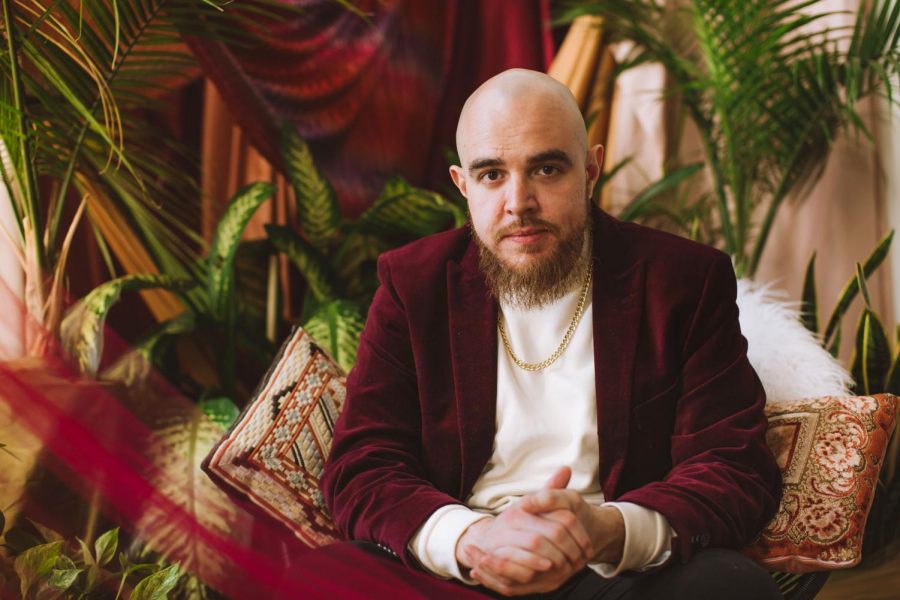 José Guadalupe Olivarez is a writer and teaching artist from Chicago. His family is from Jalisco, Mexico from a small town called Cañadas de Obregón— about 90 minutes outside of Guadalajara. His biggest influences are his three younger brothers because of “their jokes and their style of humor”. He also loves the poetry of Sandra Cisneros, Natalie Diaz, and Ada Limón. He looks up to many of his peers, whose work has been “hugely influential to [him]”, such as, Nate Marshall, Eve Ewing, Britteney Black Rose Kapri, Eloisa Amezcua, Joseph Rios, Javier Zamora. “Those are some of the people that come to mind”.

At a young age, José “always accepted other people’s answers for what [he] should be doing with [his] life”. For instance, he mentioned that he never wondered about going to college, but it was something that was engraved in him because his parents “made a sacrificio coming to the United States” and so, José saw this as his and his siblings “job to take advantage of that sacrifice”. However, when he was in high school and he listened to his peers read their own poems, which motivated José to start writing. At that point, he realized that he “didn’t just have to accept the blueprints that other people gave [him]”. Poetry made him excited about asking questions about himself, his family, and the world. So, at the age of 15, José began writing poetry. Now, he continues writing poetry because he loves the work and he loves writing poems and stories as well as challenging himself to “think about the world in a slightly different way”. He writes to continue telling his story.

José: “I think it’s important that Latinx people, Latinos, Latinas tell our own stories and not just head our story second hand from people who may have other motives. You, know, I think for a long time, I was pretty upset with this idea of like Latinx invisibility and the fact that there weren’t a ton of stories that kind of resonated with me. The stories that were being told we oftentimes sad stories that portrayed Latinx people as humorless, or as only sad or only pitiful for— you know only victims. And when I think about, you know, being Latino, I think it’s a beautiful experience.”

When I asked why he chose poetry, he mentioned that he loves writing poetry for two reasons. One, because “it’s related to one of [his] favorite things from growing up, which is Chisme” and two, because for him “poetry is also related to [his] love of hip hop”. He also mentioned that “poems can be small, but they can be powerful”. Through his poems, José tries to write about masculinity in a way that “subverts kind of standard stories about masculinity and how it functions”. He also writes about immigration, he “writes stories and poems that challenge the kind of standard story about immigration”. The standard story typically creates “a start and a finish to immigration”, “it is often told during moments of disaster” and it often focuses on the migrating aspect— people dying on the way to the United States. However, José also wants to write about the aftermath of migration, “good and bad”. These are some of the things he tries to say through his poems, but he also acknowledges that poems are unique and can be interpreted differently.

José: “The other thing is, poems are a collaborative experience, right? So there’s what I mean to say when I write the poem, but if a person interprets it a particular way, then I think that’s also correct, right? Like a poem really is two people reading and listening together. I think that’s when the poem is creative. Otherwise, you know, it might be a journal entry, you know, if it’s not shared that way.”

It is clear through José’s writing that he writes about his culture and background— he makes sure to tell his story. For instance, he mentioned that in one of his poems, he wrote about “vaporu” (VapoRub) because that “was one of the earliest medicines [he] can remember. And yet [he] never saw books talk about ‘vaporu’”. So given the chance, he took it and wrote about it. He does want us to realize though, that “artists are not mythical people and [they] don’t have necessarily any more answers than anyone else”. He acknowledges that there are poets who can help us imagine a different future for ourselves, but that their role in society “is the role of every person, which is that all of us have a piece of the struggles to take on. It’s to continue to fight our battles collectively to the best of our ability”. Taking part in our society looks different for everybody, whether it’s by showing up to protests or organizing in our communities.

José: “I’m not just a poet, I’m a person. And so I try to think about how I can continue to show up in the fights, you know, to abolish the police and to abolish ice, to bring awareness. You know what I mean? Like, I don’t just have to use my art to fight these battles. I can also vote and call my representatives and be a part of mutual aid networks and get involved in a bunch of other ways.”

In addition to being a writer, José is a performer and a teaching artist, as mentioned previously. As a performer, he enjoys the fact that poetry can be shared in an auditorium full of people or it can be shared with one other person. For him, the spoken word is “what happens when you read a poem out loud”. As a teaching artist, he gets asked to teach different things, like a writing workshop or to teach about literature, both of which he enjoys. What he enjoys the most about teaching is that “[he] gets to kind of pay it forward to newer writers” and it reminds him of why he started writing in the first place. Thus, he believes that young people are drawn to the arts because it gives them the opportunity to tell whatever stories they want to tell, whether it’s their own stories or made up stories, silly or serious. He also believes that the arts are “the only space in a young person’s academic life where they’re not graded so harshly and the stakes aren’t high”. He mentioned that oftentimes adults treat young people, not as people, we spend a lot of time telling them “what they should do, who they should be, what they should love”— we just tell them things. Sometimes we’re overprotective, “we don’t want our teenagers to experience pain or make mistakes or mess up”. Nonetheless, with art they “can play a little bit” and for José, “play is important to our development as people”.

This, however, does not take away from the hard work of educators. In fact, José wants educators to know that “they’re not alone and that [he] is not the only artist willing to support educators”. He values the work that educators do and he acknowledges that in moments like these, they are caretakers and we “don’t talk enough about who takes care of the caretakers”, so he would like to remind them “to ask for help when they need it and to think about who’s taking care of them”. To students, he would like to tell them what he normally tells himself when he “fail[s] at writing something new and that is to be gentle with yourself”.

José: “We’re in the middle of a pandemic and you know, sometimes people make it seem like if you’re not using this time to write your masterpiece, then you’re doing it wrong. But you know, the most important thing that we can do is just take care of ourselves and our family and try to stay healthy. Because we don’t know how long this is going to last. But we know we’re in it. And so you just have to try and, you know, you can’t expect yourself to function the same way that you would on a day like this two years ago, three years ago or whatever.”

Due to COVID-19, José, like many others, has been impacted by it. Before the pandemic, José primarily made his living by being a touring artist, but now, he is unable to do that. It has been a big change for him to adjust to this new reality. Another way it has impacted him has been creatively–thinking to himself, “oh, I won’t be traveling as much. I have so much more time to read and write”, yet he mentions that “so much of that time gets eaten up by anxiety and fear that it’s been really hard to concentrate on reading and writing”. He also talked about underestimating “how much time it takes to be in the house all day”, from cooking and washing dishes, to doing laundry and many other things, where before, he would go to coffee shops and not worry about washing the dishes. Although he feels like he hasn’t been very productive, he does appreciate that he is “able to stay healthy through it all”.

Something I learned from my conversation with José is that this pandemic won’t stop the work that he is doing. Currently, he is working on two projects. One project is a short story about immigration in reverse, where the character is “going to find out that identity and belonging are a lot more complicated than maybe he imagined”. The second project is a book of poems that he is writing in collaboration with a photographer from Phoenix— Tony Salazar (his IG is @santossincara). However, aside from these two projects, José plans to continue writing other things and hopes to one day write for TV. He is “taking it one project at a time”.

the phone. He was very honest about his work and clear about

why he writes, which makes his writing even more powerful than he knows. It is without a doubt that José’s passion for writing will continue to show in all his work and will continue influencing many newer and current writers. Please make sure to check out his two books. One is his debut book of poems called, Citizen Illegal. The other book is an anthology that he helped work on and it’s called The Breakbeat Poets Vol. 4: LatiNext. Both are available on Haymarket Books.

Enjoyed this interview? Learn more about José at https://joseolivarez.com

Special thank you to José Guadalupe Olivarez for allowing this student publication to interview him and for continuing to advocate for many people through his work.